The Grossery Gang vs. The Clean Team: Putrid Power

I Think I'm a Clone Now

Join Pizza Face, Rocky, Gooey and the rest of the gang as they Putrid Power up to fight the evil Clean Team, led by the wicked overlord Vac Attack. Will they be able to keep the streets of their beloved Cheap Town reeking? Or will the Clean Team wash away all the grime for good?! It’s an all-out battle between The Grossery Gang and the Clean Team in the Grossey [sic] Gang Movie! 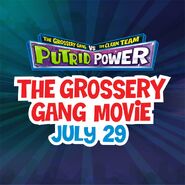 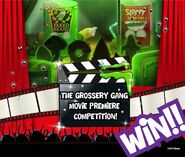 Movie contest promo from Facebook.
Add a photo to this gallery

Retrieved from "https://the-grossery-gang.fandom.com/wiki/The_Grossery_Gang_vs._The_Clean_Team:_Putrid_Power?oldid=16534"
Community content is available under CC-BY-SA unless otherwise noted.