The Grossery Gang Wikia
Register
Don't have an account?
Sign In
Advertisement
in: Grossery Gang, Series 1, Series 2,
and 3 more

The Grossery Gang is a collectable toy franchise by Australian company Moose Toys created in 2016. It is a spin-off of their discontinued Trash Pack line, while also being a comparable parody of their current Shopkins line.

Its slogan is "Your Shoppin's Gone Rotten!".

The Grossery Gang can be found in Cheap Town, a once bustling urban metropolis BUT ever since the mega motorway to Sales City was built there hasn’t been a single customer in this now run down town! Don’t feel bad though, SOMETHING has been left behind…take a peek inside the Yucky Mart and you might just catch The Grossery Gang hanging out in the vile aisles! This crusty crew of putrid products have hit their expiration dates and festered to life to create their own brand of filthy fun! There’s over 150 to find at the Yucky Mart including Putrid Pizza, Dodgey Donut, Shoccoli, Rotten Egg and more! The fun times (and fragrant fumes) never stop when the Grossery Gang’s involved! So come on down to the Yucky Mart to hang with the grossest of gangs – and see if you can collect them all!

It's the brand new Series from The Grossery Gang and things are about to get messy with the introduction of Putrid Power!

In this Putrid Power Series, an evil force known as the Clean Team is cleaning up the streets of Cheap Town, vowing to fight grime and wipe out The Grossery Gang for good! How will the Gang defeat such an enemy, why, with epic Putrid Power of course! Utilising the stench of old bin juice, our heroes must band together and transform into the ultimate disgusting dudes to fight off the power of clean! It's the ultimate new vs goo, crime vs grime, clean vs - well you get the deal!

It's The Grossery Gang Putrid Power, the biggest, boldest, bestest and grossest series yet!

The franchise was originally previewed in February of 2016 at the various Toy Fairs, where the Trash Pack connection was heavily highlighted.

Eventually, in May 2016, various social media websites opened up for the product, and are still being updated.

The series was set for a July 2016 release, but was pushed earlier to mid-June 2016, where they were made exclusive to Target and Toys R Us stores, with Walmart stores following.

A webseries by Melbourne-based animation company Dirty Puppet was also created for the franchise.

In February 2017, previews for the future of the franchise were shown at Toy Fairs, introducing vehicles and action figures to the line. 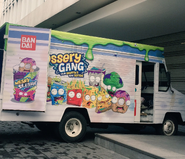 Parody of the franchise on a Wacky Packages sticker.