The Grossery Gang Wikia
Register
Don't have an account?
Sign In
Advertisement
in: Apps, Grossery Gang, Games,
and 3 more

IT’S ALL GOING OFF IN THE NEW GROSSERY GANG APP!

Slip and slide your way into the cool, grossed-out world of festering-fun, inside the doors of the Yucky Mart – where your shoppins’ gone rotten!

This all new Grossery Gang App, puts the Yucky Mart’s world of grossness right at your fingertips as you explore the fungus covered floor and vile aisles of the ultimate ‘inconvenience store.’

Inside you’ll find more than your favourite gang of gruesome grosseries, you’ll find a world of cool arcade games, mazes, AR… and the best part is you’re in control of the whole cruddy crew – Doc Broc, Egghead, Sparkles and of course our boys Rocky Donut & Pizza face [sic].

Plus, there’s always more cool new games being added! But just like the mountainous, mouldy muck, the fun keeps growing! There are over 150 of your favourite Grossery Gang characters for rotten kids to save and share!

Who said you can’t play with your food?

So, come on it’s time to get your sticky fingers on the best, new, free game app around for children of all ages!

This section of the app contains all the Grosseries collected by the milk crates throughout the game, allowing the player to view them and rotate them.

This section of the app lets the player take a screenshot using the Grosseries collected from the milk crates. It also uses various backgrounds and effects.

This game uses the tilt function of the device. The player controls Egghead on a lunch tray-created maze by tilting the device. Coins are scattered through the level, and the player must collect them, with gold coins being worth more.

This game was released during the 1.0.7 patch of the game. It is a memory game, where the player taps on the crates given to them to match the characters. There are three strikes per level, with the first level having four crates, the second having six, and the third having eight.

The player takes control of Gooey Chewie, who is stretched out like a catapult, to fling stones at bubbles escaping from a slimy mop bucket and pop them. Green bubbles are worth one point, yellow are worth three points, and black bubbles pop any bubbles near it if popped.

The player has to squish maggots crawling on a microwave door in the allotted time slot. Squishing enough maggots boots the microwave button, which lets out a zap that can zap the maggots instead. Leaving maggots alone for too long causes them to turn into flies, which are much faster and are worth more points.

This game uses the AR function of the device. Aiming the device at a special printed-out sheet, or by using the label of boxes or large packs allows the Grosseries to be placed in the real world, while the player hits at them in Whack-a-Mole style.

This feature allows the player to watch a few videos from the official Grossery Gang Youtube channel. For unknown reasons in the 2.01 update, this has been removed.

This feature has the credits option of the game. In the iOS version of the game, The Grossery Gang Emoji Keyboard is purchasable here as well.

Added with the 1.09 update, this takes the player to the streets of Cheap Town. The Yucky Mart can be accessed here, along with the Gang HQ and Smelly Stash (here titled Souvenirs). An addition is a version of the Grossery Gang List app, which contains an updated list compared to the app. The Sticky Cinema update has exclusive videos that are only available here, not on the franchise's Youtube website.

Putrid Alley is a special section of Cheap Town unlocked with the 2.01 update. This gives three new games to the area.

Playing as Vac Attack, the player uses the camera of their device to spiral around the screen and squirt at the invading Grosseries before they get to you, trapping them in bubbles. Letting the Grosseries get to you lets them attack you, which drains your health.

Playing as Trash Head, the player taps on targets placed on crates in an allotted time slot to break them. Letting the timer run out or touching a bomb ends the game.

Playing as Putrid Pizza on the Delivery Strike Motor Bike, the player uses arrow keys to control him through street lanes to pick up coins and timers while avoiding cleaning supplies, which lower the timer. The game ends when the timer is empty. 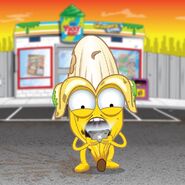 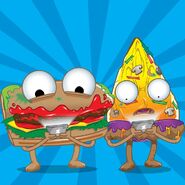 On a Facebook promo with Grub Sub and Putrid Pizza.