Spewy Loo is an is an exclusive Grossery from Series 5.

Look what just kicked down the door of the cubicle! This toxic toilet's pipes are blocked and ready to explode! He tries to keep his lid shut, but when he gets powered up he lets himself go! He's got great aim when he flicks his icky toilet brush! The Rotbots better not get caught with their pants down around this guy![1]

Spewy Loo is an overflowing toilet. His head is made up of green slime that is sticking the lid open from the seat of the toilet, revealing two yellow eyes. A stream of yellowed toilet paper makes up a tongue sticking out of where his mouth would be. His limbs are made of the same green slime as he is, with toilet paper wrappings around his ankles and wrists. 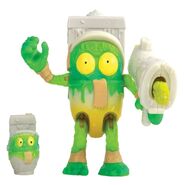