The Grossery Gang Wikia
Register
Don't have an account?
Sign In
Advertisement
in: Pages currently under construction, Rotbots, Action Figures,
and 6 more

Space Jump Pumpkin is a Series 5 action figure. He appears to be the second in command of the Rotbots.

Space Jump Pumpkin is a vile veg from the future. He's hard-headed and uses his thick skin to attack the Grosseries. With his pumpkin flicking shooter, he's out to squeeze as much gross from the Grosseries as possible. So stay off his patch if you don't want to be smashed!

Space Jump Pumpkin is an evil pumpkin. He has black eyes with red pupils, with one of his eyes replaced with a cybernetic one. He is orange, with green coloring at the bottom. Vines form his arms and legs. One of his arms is completely mechanical, while his feet and one of his knee joints are mechanical as well. He has a carved-out mouth that is leaking purple pumpkin guts. He has a splat of guts on his head as well. 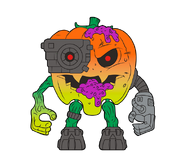 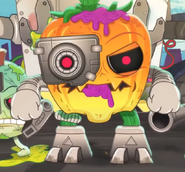 Rot Bot Pumpkin as seen in the webseries.