Smelly Onion is an Exclusive Grossery from the Horrid Hot Dog Machine playset.

Smelly Onion is a crying half slice of red onion. He has crossed eyes with tears coming out of them. 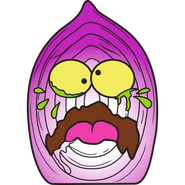