The Grossery Gang Wikia
Register
Don't have an account?
Sign In
Advertisement
in: Moldy Veg, Grosseries, Series 1 Grosseries,
and 4 more

From the Moldy Veg team, it's already soiled before it gets boiled!

MAY CONTAIN TRACES OF: DOG BONES, ROOTS AND CLAY!

Smashed Potato is a moldy, discolored potato, with shoots growing out of his body. He has crossed eyes and has a buck tooth hanging from his mouth.

Smashed Potato's collector card is Card 96 in the series. His card is a Touch 'N' Feel. He is being squished down by a hammer, splattering him everywhere, as he continues to grin. He has the tagline of "Smashed Potato" on the bottom. 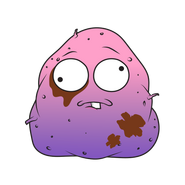 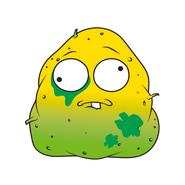