Sloppy Soup Tin is a red and white labelled can of soup with oil stains. He has inwards crossing eyes, and is dribbling out soup from his mouth. On his label is a bowl of chunky soup and his name.

Sloppy Soup Tin's collector card is Card 117 in the series. His card is holographic. He has a crazed expression on his face and his holding a spoon and can opener, the latter which he is using to open himself, with his lid popping off and part of his can being spiraled off, leaking his contents. He has the tagline of "Sloppy Soup Tin: Last Seen In Trash Cans" on the bottom. 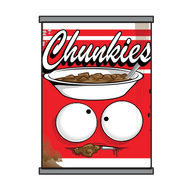 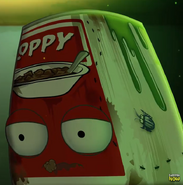 Sloppy Soup Tin as seen in the webseries.