He's the can of fish that isn't delish!

May Contain Traces Of: Fish bones, gills, and ocean!

Slimy Sardines is a greasy sardine can, with his name written on his top right corner. He has a worried expression and two gapped buck teeth. On his wrapper is a disgusted sardine, along with a trail of ants. He also contains a pull tab on his top left corner.

Slimy Sardines' collector card is Card 116 in the series. His card is holographic. He is holding a fishing line, showing off a skeletal fish catch. He has the tagline of "Slimy Sardines: Last Seen In Trash Cans" on the bottom. 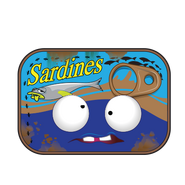 Slimy Sardines as seen in the webseries.