The Grossery Gang Wikia
Register
Don't have an account?
Sign In
Advertisement
in: Half Baked Bakery, Grosseries, Series 1 Grosseries,
and 4 more

Rotten Apple Pie is a rare Half Baked Bakery Grossery from Series 1.

From the Half Baked Bakery, it's piping hot and full of rot!

MAY CONTAIN TRACES OF: TREE, SLIME AND WORMS!

Rotten Apple Pie is a slimy, moldy handheld apple pie, with some of his mold and slime dripping down his wrapper. He has crossed eyes and several gapped teeth.

Rotten Apple Pie's collector card is Card 26 in the series. He has one hand on his hip, with the other pointing upwards as he looks upwards as well. A human finger is poking upwards from his pie. He has the tagline of "A Finger in Every Pie!" on the bottom. 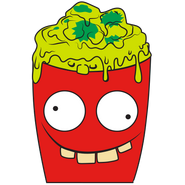 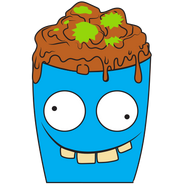