From the Moldy Veg team, it's old and moldy and always unclean, just right for Smelloween!

MAY CONTAIN TRACES OF: SOIL, GROT AND HALLOWEEN CANDY!

May Contain Traces Of: Soil, dirt, and Halloween candy!

Puking Pumpkin is a moldy jack-o-lantern with crossed eyes and a carved mouth with several teeth.

Puking Pumpkin's collector card is Card 93. His card is a Touch 'N' Feel card. He is sitting in a trick-or-treat bucket, with one hand holding a half-eaten candy bar, and the other hand on his stomach, as if he is feeling full from eating too much candy. He has a sick expression on his face, as vomit leaks from his open mouth. He has the tagline of "Puking Pumpkin" on the bottom. 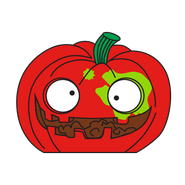 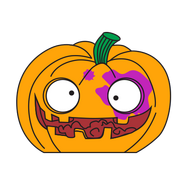