PukieHurlC is a vomit-splattered chocolate chip cookie. She has green sclera instead of the standard white, and large brown pupils with white highlights. Being a female Grossery, she has eyelashes. However, hers branches off into six lashes, rather than the standard three.

PukieHurlC's original design, as a direct parody of the CookieSwirlC logo. 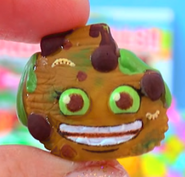 PukieHurlC's exclusive figure.
Add a photo to this gallery

Retrieved from "https://the-grossery-gang.fandom.com/wiki/PukieHurlC?oldid=15900"
Community content is available under CC-BY-SA unless otherwise noted.