Meet Potato Punk -- A punk who looks like junk! He dug himself out of the compost bin to help his gang of Grosseries fight the Rotbots. He's ready to take a mashing for his buddies and will always chip in when he can. Potato Punk is a spud who knows how to shoot crud with his Toxic Waste Flicker!

Potato Punk is an unripe potato. He wears a studded black vest, blue jeans, a silver studded belt, black biker boots, a gold padlock necklace, and black spiked wristbands. He has a red mohawk on the top of his head. His face is in a glare, with a large tooth sticking out and purple slime trickling down. The back of his vest has the Grossery Gang cart logo on the back in purple. 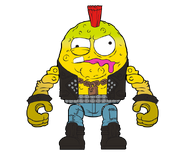