With a festering fin and slime-covered skin, Pirate Sharrrk is one of the most putrid pirates to come up from a sewerage pipe! He has a jaw full of sores and teeth like a rusted chainsaw. This powered up white pointer is ready to help the Grosseries fight against the Rotbots! It's time for a Pirate Shaaaaarrrk attack!

Pirate Sharrrrk is a damaged blue shark. He wears a black pair of boots, purple pants, and a black eyepatch. He has a black armband on one wrist and green seaweed wrapped around his other arm. He has yellowed teeth with visible pink gums. 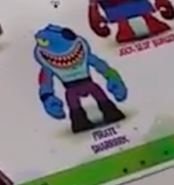 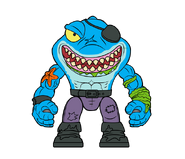