The Grossery Gang Wikia
Register
Don't have an account?
Sign In
Advertisement
in: Moldy Veg, Grosseries, Series 1 Grosseries,
and 4 more

From the Moldy Veg team, it's the fungus with extra fungus!

MAY CONTAIN TRACES OF: FUNGUS, FUNGUS AND FUNGUS!

He's the fungus with extra fungus!

Dislikes: Anything that isn't fungus

May Contain Traces Of: Fungus, fungus, and fungus!

Mushy Mushroom is a moldy, spotted mushroom with muck on his cap. He also has half-open eyes and an overbite with three teeth showing.

Mushy Mushroom's collector card is Card 91 in the series. His card is a Touch 'N' Feel. He is wearing a leopard-print loin cloth and wielding a spear and swinging on a vine, while he angrily charges at the camera. He has the tagline of "Mushy Mushroom" on the bottom. 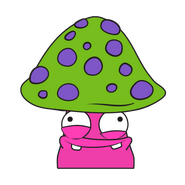 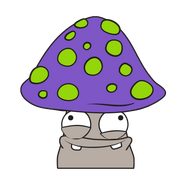