The Grossery Gang Wikia
Register
Don't have an account?
Sign In
Advertisement
in: Webseries, Scummy Sodas, Grosseries,
and 3 more

Mucus Juice Box is a leaky juice box. He is somewhat crumpled in and has splatters of juice on his body. He is leaking juice from a straw hole poked into his top. His eyes are facing outwards and he has a crumple-formed frown.

His design in the webseries gives him large glistening eyes, juice tears, raspberry logos on his top and side, and a standard mouth. He is much smaller in the webseries as well. His straw is on the other side of him. 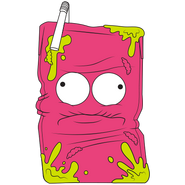 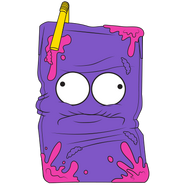 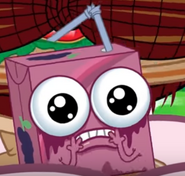 Mucus Juice Box as seen in the webseries.