Jock Slop Burger in[sic] a nasty piece of meat from the land of the Scots! He'll take on anyone with his saggy bagpipe highland flinger! Jock proudly wears the McGrossery tartan when he goes into battle. This guy is stocked full of stink and ready to show his brave heart at he battles the Rotbots!

Jock Slop Burger is a gross burger. He is wearing a blue kilt with a black belt, with red arms and legs sticking out. His meat has a splatter of blue mold on it, resembling Scottish war paint. 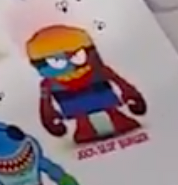 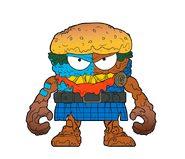