For the Series 1 Grossery with the same name, click here.

Horrid Hot Dog is a slimy hot dog sausage. His open mouth is formed by strings of hot dog meat, and his bottom is dunked in slime. 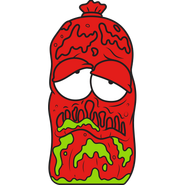