Hairy Hare is a limited edition Exclusive Grossery only found in the Surprise Eggs.

Hairy Hare is a dirty rabbit, covered in slime and bugs. He has large yellowed teeth, and his eyes are pointing outwards. He also has a downwards-drooping left ear. 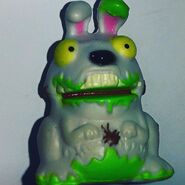