Grotty Graffiti is an is an exclusive Grossery from Series 5.

Grotty Graffiti is ready to make his mark on the Rotbots! When he gets angry he pops his top and gives everyone a spray! If there's a blank wall to scrawl on he can't help covering it with a toxic tag! Watch out, this Grossery Gang member is a vile vandal who's hard to handle![1]

Grotty Graffiti is a dented can of spray paint. He is designed to look like he's wearing a red track jumpsuit. He has a yellow-orange face poking out of the front of his can. The remainder of his body is red, with white shoes poking out under his pants legs and cuffed sleeves. He wears a metallic silver clock necklace and has a spray lid in the same color. He has orange hands with black fingerless gloves and a single black band on one of his ankles. He has thick eyebrows and his face in a snarl. 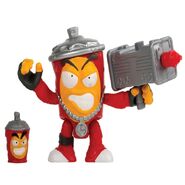