The Grossery Gang Wikia
Register
Don't have an account?
Sign In
Advertisement
in: Webseries, Sticky Sweets, Action Figures,
and 12 more

From the Sticky Sweets team, it's pre-chewed to slide down easy!

MAY CONTAIN TRACES OF: PHLEGM, DROOL AND FILLINGS!

Extra crude and already chewed, this dude's not "Old School" - he's "Old Drool!" Icky and sticky, gooey Chewie can't wait to get his sticky hands on the Clean Team. They had better watch out for his sloppy slingshot because when he hits, he sticks! Get ready to fight dirty!

Gooey Chewie is powered up and ready to stick it to the Bug Army! Crude and chewed, he's a "Top Gum" with his sloppy slingshot and can't wait to fling some drool the bug's way! He's ready for a night attack with his Glow in the Dark powers. Gooey will never run from a fight and always sticks by his fellow fighters.

Gooey Chewie is powered up and ready to take on the Rotbots! He is a Kung-Goo master who can stick it to the enemy with his icky ninja skills. He moves in silence as he sneaks up on his target and launches a surprise saliva attack! Gooey Chewie has drool that rules!

He's pre-chewed to slide down easy!

Dislikes: Being stepped on

May Contain Traces Of: Phlegm, drool, and fillings!

Gooey Chewie is a slimy, pre-chewed piece of chewing gum. His eyes are looking in different directions, and he has an open mouthed grin with gum strings sticking to it.

In the webseries, he is designed as triangular, rather than square.

Gooey Chewie's collector card is Card 61 in the series. His card is a sticker card. He is stuck to the ground, with his top stuck to a shoe that has stepped on him, as he grins. He has the tagline of "Gooey Chewie" on the bottom. 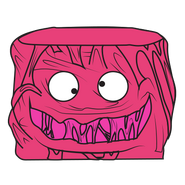 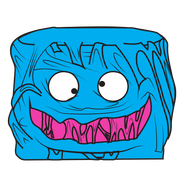 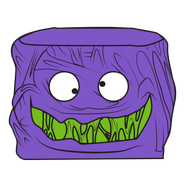 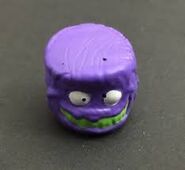 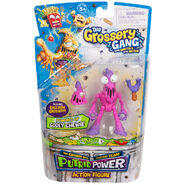 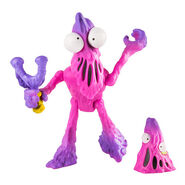 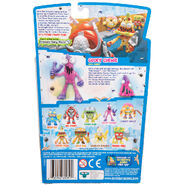 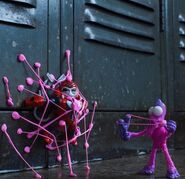 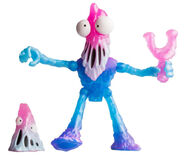 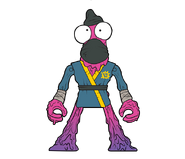 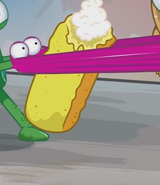 Gooey in the webseries. 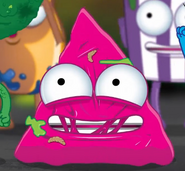 Gooey's full design in the webseries. 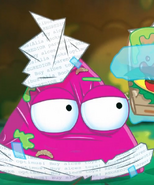 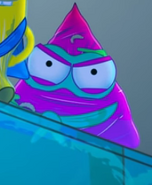 Gooey's ninja ancestor as seen in the webseries.

From The Grossery Game. 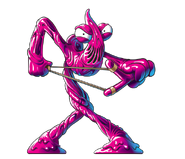