The Grossery Gang Wikia
Register
Don't have an account?
Sign In
Advertisement
in: Webseries, Glowin' Gadgets, Special Edition,
and 5 more

Talk about shocking! Flat Battery is jumpy, jittery and constantly on edge, he's the one who will light up (or set fire) to any occasion!

Talk about shocking! Surge is constantly on edge, his remaining kilowatts always SPARKING out of his head at inopportune times. Jumpy, jittery, and packed with joules, Surge's the who'll light up (or set fire to) any situation - be it party, picnic, or, well, funeral. If you need someone firmly grounded, Surge is definitely NOT your guy. But for a jolt of unpredictable manic energy, look no further than this putrid power cell. [1]

Jumpy, jittery, and constantly on edge, Flat Battery's the one who'll light up (or set fire to) any situation.

May Contain Traces Of: Electrodes, chemicals, and poison!

Flat Battery is a cylindrical battery with a banged-up body. He has red lightning bolts on his body, and has eyes going in different directions, with a crazy, toothy grin. He is coated with mold on the top of him.

In the webseries, his design has added stress wrinkles around his eyes. 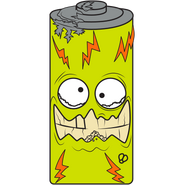 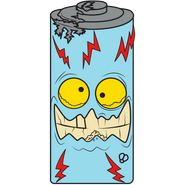 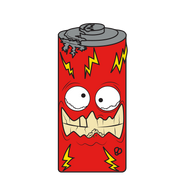 Surge as seen in the webseries 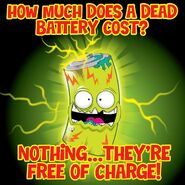