Faked Beanz is an opened can of baked beans with a green label. His label has a logo with slime-coated beans pierced by a fork that says "Faked Beanz". He is leaking bean juice from his top and has some around his mouth as well. His eyes are pointing outwards and a very thin tongue is sticking out of his mouth. He has a trail of ants crawling on his bottom side.

Faked Beanz's collector card is Card 115 in the series. His card is holographic. He is sitting in a pool of water that is bubbling as he strains, farting into it. He has the tagline of "Faked Beanz: Last Seen In Trash Cans" on the bottom. 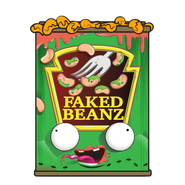 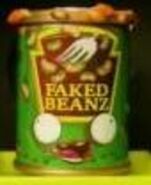 Figure form as seen in the Series 1 commercial. 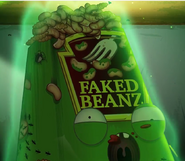 Faked Beanz as seen in the webseries.