The Grossery Gang Wikia
Register
Don't have an account?
Sign In
Advertisement
in: Awful Sauces, Webseries, Grosseries,
and 4 more

Disgusting Mustard is a common Awful Sauces Grossery from Series 1.

From the Awful Sauces team, it's the moldy mustard that will make you disgusted!

MAY CONTAIN TRACES OF: GREASE, DIRT AND CAR FUMES!

He's the moldy mustard that will make you disgusted!

May Contain Traces Of: Grease, dirt, and car fumes!

Disgusting Mustard is a leaky and dirty bottle of mustard. His left eye is half open and he is sticking his tongue out.

Disgusting Mustard's collector card is Card 102 in the series. His card is a Heat 'N' Reveal card. He is being sliced in half in the center by a sword, while he reacts in shock. He has the tagline of "Disgusting Mustard" on the bottom. 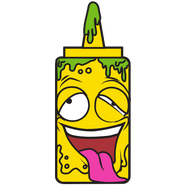 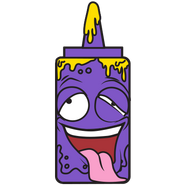 Disgusting Mustard as seen in the webseries.