He's the filthy wad of cash that belongs in the trash!

May Contain Traces Of: Germs, gunk, and ink!

Dirty Money is a slimy wad of money notes, wrapped in a money holder. Both the money holder and the money are dripping with slime, along with flies on his corners. He has half-opened, outwards-facing eyes, and an open mouthed smile with gapped teeth. Bugs are also crawling on him as well. 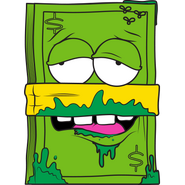 Dirty Money as seen in the webseries.