The Grossery Gang Wikia
Register
Don't have an account?
Sign In
Advertisement
in: Pages currently under construction, Rotbots, Action Figures,
and 6 more

Cyber-Slop Pizza is a Series 5 action figure. He is the main antagonist for Series 5, and leader of the Rotbots.

Cyber-Slop Pizza's a slimy cyber-slice who's on a mission and nothing's going to stop him! Half machine and half mozzarella, this sloppy pizza has come back from the future to collect as much grossness that he can get his filthy futuristic hands on and he's not leaving until every drop of slop is sucked up!

Cyber-Slop Pizza is similar in design to Putrid Pizza, as he is a future version of him. He wears a black cape with a dark grey robotic leg, a purple robotic arm, and wields a hand cannon that can shoot projectiles out. He is green, with a dark grey jaw replacing his crust. His eyes are solid black, with one of them robotic. He has a hunch in his back. 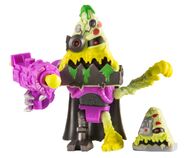 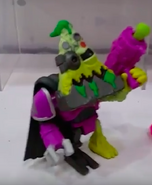 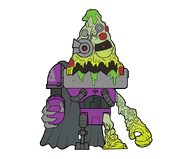 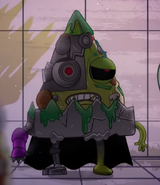 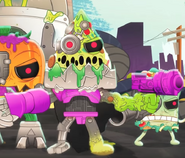