The Grossery Gang Wikia
Register
Don't have an account?
Sign In
Advertisement
in: Trashed Cans, Webseries, Grosseries,
and 8 more

He's [sic] the can full of fat that's crazy about cats!

May Contain Traces Of: Fish, grease, and furballs!

Cruddy Cat Food is a blue and purple tin of cat food with her name on her label. She is leaking slime from her top and has food splatters on her side and mouth. She has an innocent expression and her tongue is somewhat sticking out of her grin.

Cruddy Cat Food's collector card is Card 114 in the series. Her card is holographic. She is wearing a pair of slime-filled boots, which she is looking at, and a pioneer cap with a feather in it, while a cat is hissing at her. She has the tagline of "Cruddy Cat Food: Last Seen In Trash Cans" on the bottom.

She also appears in the second puzzle with the same image. 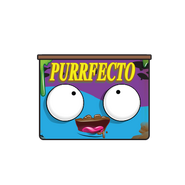 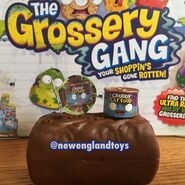 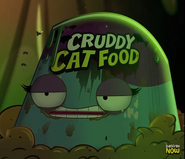 Cruddy Cat Food as seen in the webseries.