The Grossery Gang Wikia
Register
Don't have an account?
Sign In
Advertisement
in: Half Baked Bakery, Grosseries, Series 1 Grosseries,
and 4 more

Chunky Cheesecake is a rare Half Baked Bakery Grossery from Series 1.

From the Half Baked Bakery, it's moldy and cheesy to make you feel queasy!

MAY CONTAIN TRACES OF: MOUSE POOP, TOE NAILS AND CAKE!

He's moldy and cheesy and makes you feel queasy!

May Contain Traces Of: Mouse poop, toenails, and cake!

Chunky Cheesecake is a slimy cheesecake with crossed eyes and slime dribbling out of his wrinkly mouth. His filling is moldy, and he has whipped cream dollops encircled on his crust.

Chunky Cheesecake's collector card is Card 22 in the series. He is angrily glaring at the camera with an open-mouthed frown, while making a threatening gesture with his hands. He has the tagline of "You Want a Piece Of Me?" on the bottom. 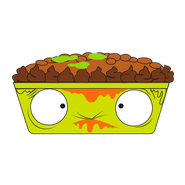 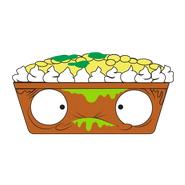