The Grossery Gang Wikia
Register
Don't have an account?
Sign In
Advertisement
in: Webseries, Series 4 Grosseries, Characters voiced by Tom Kennedy,
and 2 more

Classic
Chunder is a Grossery that comes exclusive with Gen. Arak Attack as an accessory.

Chunder is an evil fly. He is furry with thick lips. He is wrapped in a slime-covered webbing that binds his arms, but lets his feet stick out. 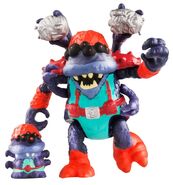