Cauli-Fouler is an ultra rare Moldy Veg Grossery from Series 1.

From the Moldy Veg team, it's the veggie that feels like a wedgy!

MAY CONTAIN TRACES OF: BUGS, MANURE AND TRACTOR PARTS!

May Contain Traces Of: Bugs, manure, and tractor!

Cauli-Fouler is a moldy head of cauliflower with a distressed look on his face.

Cauli-Foulder's collector card is Card 30 in the series. He is sitting in a bathtub filled with cheese sauce, grinning towards the camera with his feet sticking out and his hands up. He has the tagline of "Cauli in Cheese Sauce!" on the bottom. 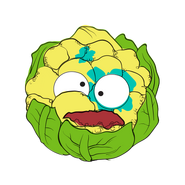 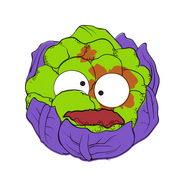