Blow Fly is an exclusive Grossery.

Watch out for the "Muck from Above!" Blow Fly is one annoying dude. When he's not relaxing on a dog poop he's nibbling on your lunch! This mutated maggot with wings has come to help the Grosseries defeat the Clean Team! Gross to the max, Blow Fly loves to dive bomb the enemy and drop the slop on his opponents! He's one foul fly! Get ready to fight dirty!

Blow Fly is a slimy fly. He has half-opened yellow eyes and thick lips with gapped teeth, which is giving a grin. There is a chicken drumstick and beans on his belly. 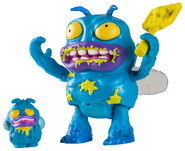 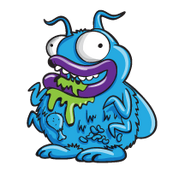