Bad Beef Can is a limited edition Trashed Cans Grossery from Series 1.

He's the tin that belongs in the bin!

May Contain Traces Of: Rotting meat, milk, and pus!

Bad Beef Can is a can of boiled beef with his name on his label, along with a slimy chunk of rare roast beef. He has a green tongue that is dripping with beef juice, which is sticking out of his mouth. He is somewhat smudged with oils and he has a trail of ants crawling in formation on his left side.

Bad Beef Can's collector card is Card 113 in the series. His card is holographic. He is tied up to a stake with a fire underneath it as he reacts in fear. The stake has a faded sign that says "Slap some beef on the barbie!" on it. He has the tagline of "Bad Beef Can: Last Seen In Trash Cans" on the bottom. 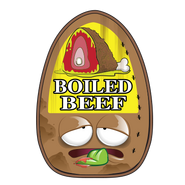 Bad Beef Can as seen in the webseries.