When it comes to stinky beans this dude is extreme! Bad Beans Shooter is loaded with ammo and ready to blow away his enemies! He likes to ambush others by hiding and letting out a sneaky leak from his toxic tin of beans! The Rotbots will be too busy holding their noses to be able to fight back!

Bad Beans Shooter is a gross can of opened baked beans. He is wearing green pants, brown combat boots, and a gold bandoleer around his waist. Hisis limbs are made of baked beans. He has warpaint lines under his eyes, a star on his forehead, and a confused expression. 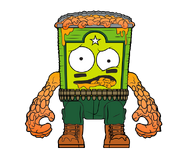